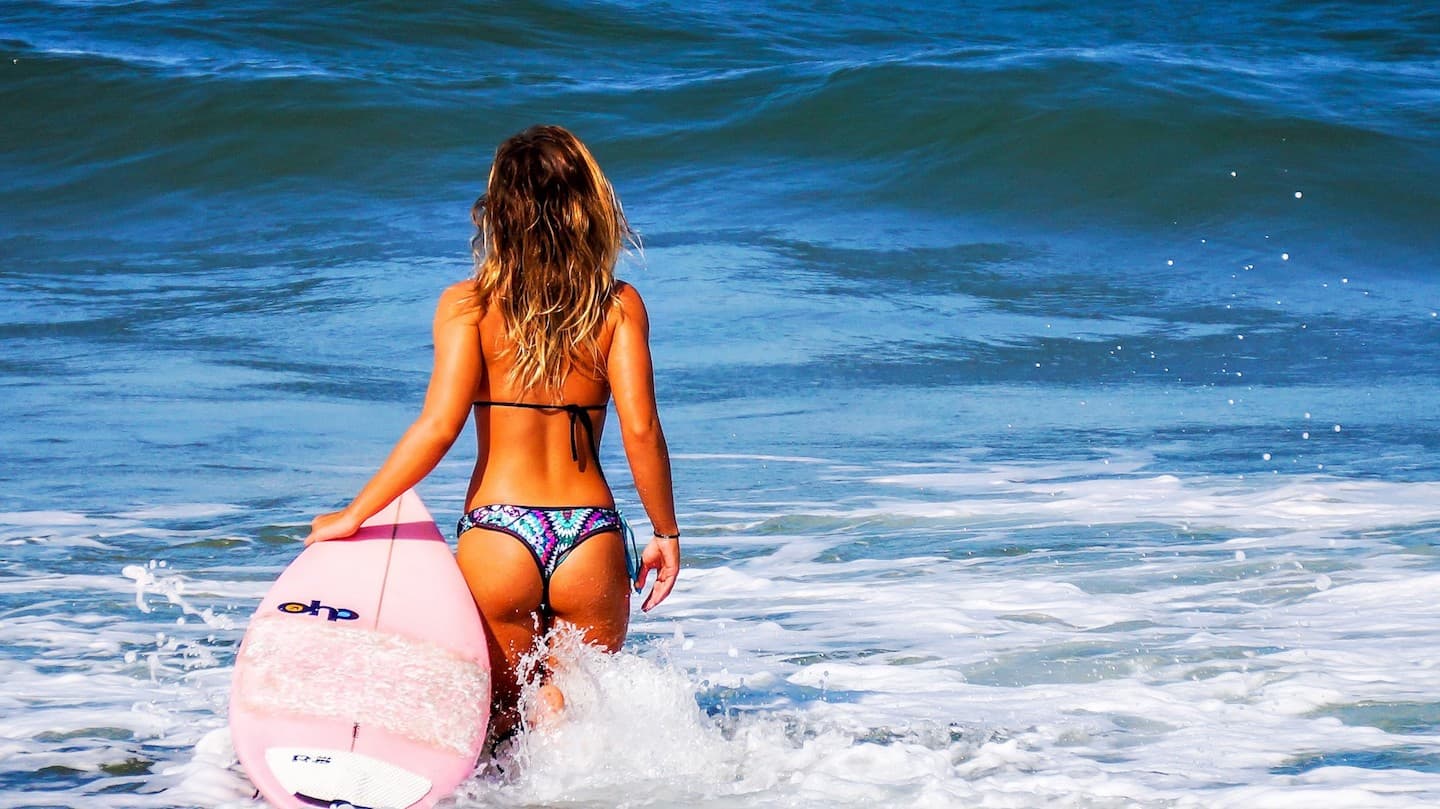 The industrial revolution is over.

And that’s a good thing if you love travel and surf.

It’s never been easier to quit your 9–5 job and become a surf bum…well, a surf bum that still makes the median salary.

The rise of the internet of things has made the opportunities to work remotely skyrocket in the past few years. And that means the ability to live a life traveling and surfing around the world has never been easier.

This along with cheap air travel has made Robert August’s dream voyage in The Endless Summer something any ambitious surfer can accomplish.

Any real surfer starts asking themselves after high school/college graduation…

“How can I figure out how to work as little as possible — and surf as much as possible?”

In order to realize this goal — I’ve researched some of the best jobs for surfers that give you the most off-time, have flexible schedules, or involve late shifts to allow for ample amounts of dawn patrol.

Becoming a freelancer is one of the first things that comes to mind and rightfully so. Freelance developers on average make more money than their salaried workers.

While freelancers regularly get to set their own hours, they also work a lot less hours. And if you want to make more money you can always increase the amount of hours you work per week.

Because freelancers normally work on a project by project basis — work usually comes in waves (pun intended). If you work as a remote developer, you get the best of both worlds — being able to live wherever you want and set your own hours.

And if you’re good enough — a great option would be to work remotely for a company that allows full-time remote work. You may not get to set your own hours, but you’ll likely have a high steady income that’ll let you live a stone’s throw away from any of your favorite surf breaks.

The other option would be to work for a high pay/unlimited vacation startup — but you better be good in this scenario because the unlimited vacation can actually mean less vacation. In a study done by Project: Time Off, it showed the average American worker actually takes a full work week less time off than pre-2000 levels.

Pay can be substantial — in the 6 figure range — for a year round surf travel company like TropicSurf. And if you score a job with a luxury surf company, your job will quite literally be to travel and surf with people.

...YOU'RE A FREAKING SURF INSTRUCTOR!

Sure you may not be surfing your break of choice every time of the year — but stop being such a spoiled brat — you’re ALWAYS in the water. And even at the most intense of surf instructor jobs, you're going to have an ‘off-season’ with opportunities to travel and surf in some of the most exotic destinations in the world.

Because you’re going to make countless connections along the way.

Not to mention the surplus of people who are going to feel like they ‘owe you one’ because you pushed them into the best waves of their lives.

And while you may find it frustrating to be in the surf only to push and coach students, you’ll always have an opportunity to sneak in a few waves.

Think about being Frank Abagnale Jr. and scoring the most epic surf of your life — whenever you want.

Ok ok…I do suggest you do this legally, but hey — it would’ve made the movie that much better.

That’s how sweet it can be for a surfer to be a pilot.

Not only will you understand weather patterns better than your average surfer, but the pay is great and you’re schedule can be epic.

If you fly a long haul flight you’ll regularly get 3–4 days off. Couple this with knowing your schedule at least a month in advance — and you can switch flights with fellow workers to score an epic 7–10 days off in a month.

Now if you’re eye-sight’s fucked up or you simply don’t trust yourself with the lives of 300+ people 50,000 feet above ground — you could always be cabin crew.

Heard of standby?  Yeah it's epic.

A real surfer doesn’t care about sleeping on the floor of JFK waiting to get the next flight out to Tahiti — especially if it costs $200 roundtrip. Anyone working in the airline industry is going to get heavily discounted tickets to some of the most exotic locations in the world.

What better job to travel and surf than one that pays you to travel. 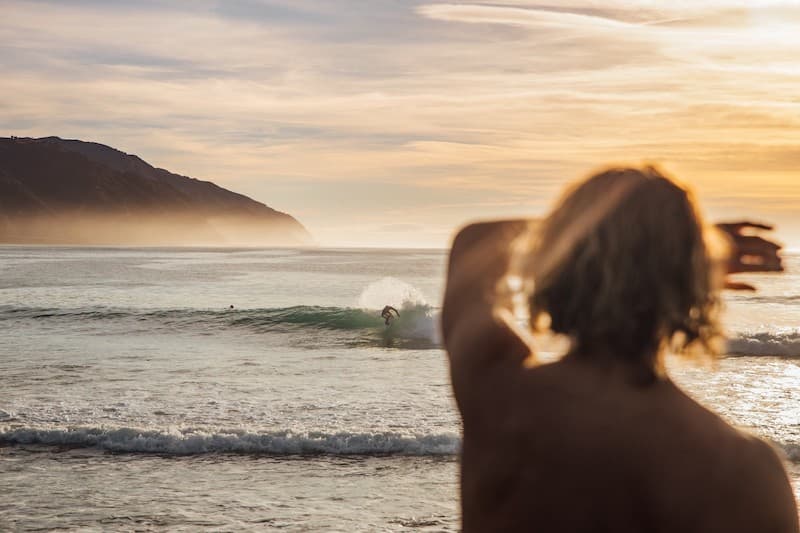 Probably the first job any surf bum tried to make a living out of is as a lifeguard. And why not? It seems like the best job for a surfer in the world.

Sit and watch waves all day, every day. You’ll quickly come to understand your local break as good as anyone — not saying you’re going to have it dialed in better than Kelly, but you’ll be up there amongst the 'brocals'.

If you're lucky enough to live in a year-long sunny-city, you may have the opportunity to make this a reality. Your off-seasons would become a dream come true — trading waves with your fellow stand-mate. If not, you can still have a hell of good time in the summer working and surfing and then go broke once winter comes around.

The best option to combat this unstable income would be to become a firefighter.

First of all — both jobs keep you in great shape for big swells or trips to epic surf destinations. Second — firefighters get almost 20 days off a month!

An average firefighter's schedule is 24 hours on, 48 hours off. Now you may not be able to string these together to take a massive 20-day surf expedition, but live in a swell magnet state and you’ll still be able to take regular mission trips.

When you do get elongated vacation — you may get free/discounted stays at remote surf destinations for your expertise. I mean you're an emergency situation guru — asking never hurts.

This list is for jobs that help you Travel & Surf. Well, if one route is to work in the travel industry — you bet another would be to work in the surf industry.

The biggest and best employers would be to get a job at surfline. The office is across the street from Huntington Beach and employees get regular breaks to surf.

Plus working at one of the big surf companies — you naturally become a swell reading genius. Surfline and Magicseaweed would really excel for this, but working for the WSL or even a big surf mag like Stab or The Inertia — you’ll definitely find yourself learning some tips from the experts.

If you choose to work for a brand like Hurley, Quiksilver, Vissla, etc. your most notable perk will be free or discounted gear. But shit—working in retail can really suck so make sure you get a dope position.

One such job could be an outside sales rep for a surf brand. Your get to create your own schedule, get the latest products, and probably the opportunity to travel to surf destinations.

Whatever company you find in the industry — naturally your work hours will get bent when an epic swell rolls through…and your boss will completely understand why.

If you’re artistic or can fly a drone (yes those are completely different), freelance photography work can have some of the same perks of being a remote developer.

The inconsistency of work can be an issue if you’re not used to being a freelancer/entrepreneur/hustler. But if you can get past this stage and find work — especially for a surf company — you’ll usually get to be where the waves are best. In some instances you can even get comped travel/accommodation in exchange for your services.

Without surf photography, surfing wouldn’t be considered a sport. But it’ll usually mean that when the waves are best — you’ll be shooting rather than surfing. If you’re not a pumping barrels kind of guy then maybe this is perfect for you.

Plus you’ll finds friends — locals and pros alike — for snapping an epic shot. 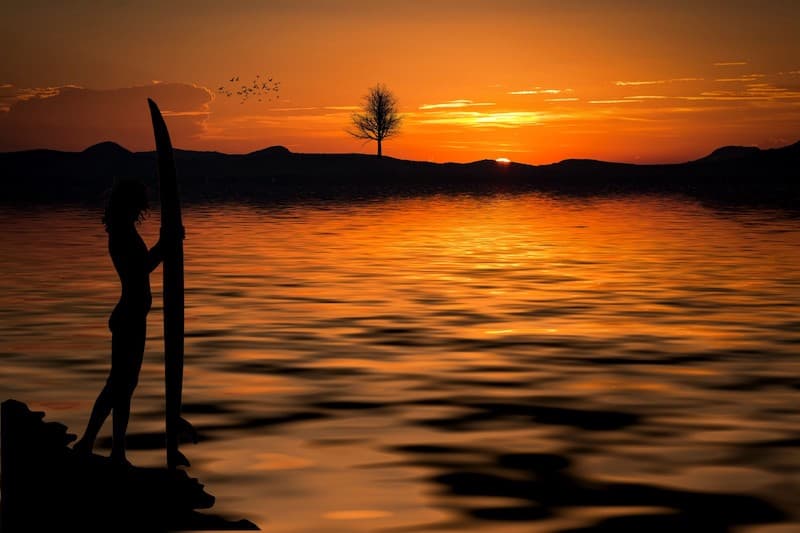 Probably the easiest of all the surf jobs to get is as a bartender or waiter. This job doesn’t necessarily pay the bills to surf and travel around the world, but you’ll keep the poor surfer stoke alive.

If you score a job at a surf bar — you’ll be the king of good times. But unless you have magical hangover powers, you likely won’t be surfing dawn patrols. However, those empty midday lineups will become your new best friend. Plus who doesn’t want a free beer after an epic surf. That’s lifestyle design at it’s best.

While you’ll likely be working long hours, be completely bored, and have little-to-no ambition but to score tubes — you’ll be able to chat with all your friends at night about how good the surf was all day.

I mean...I can’t think of a better way to spend my days…

...plus everybody loves the guy giving them beer.

While you may not think of fisherman as the best surfers from their beer bellies and lack of athleticism (minus pop-eye sized forearms) — the job is actually super travel and surf friendly.

I know a few mates working in Alaska who get paid year round (some in 6-figures) and they only work seasonally!

Sure it’s hard, laborious work. Sometimes you’ll sleep only a couple hours a day for a month straight. But then you get back to shore — pockets full of cash and no work for another month.

If you can hold off on becoming an alcoholic when you’re back on land, becoming a year round fisherman is a great job for surfers.

Working in the oil and gas industry is really similar to being a fisherman. The schedules will likely be 4 weeks on, 4 weeks off. Again, you’ll get a steady paycheck where you get to lay out a map, close your eyes and put your finger down.

Both in the oil, gas, or maritime jobs — your employer will generally fly you to the job and then fly you wherever you want after you're done. If you don’t have a 'home' and 'responsibilities' to get back to, you can score a free flight to Tahiti, the Maldives, or anywhere else gifted by growing swells.

The same rules apply for this position as for fishermen — you have to be strong mentally, because you’ll probably be in such a limited world on the rig you’ll want to go full Fear and Loathing in Las Vegas when you get to the mainland.

So do some meditation, stay in good shape —and then scoooooore some sick waves braaaah! 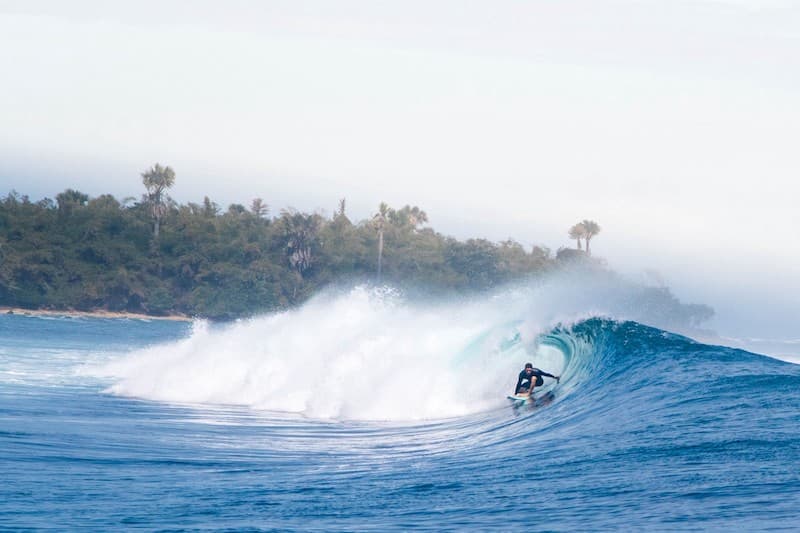 Healthcare? Really the last one on the list is...healthcare?

If you’ve ever been to some of the most high-end surf destinations in the world, who is there?

A big group of doctors enjoying the sweet life — surfing, having nice dinners with drinks, and taking every excursion money can buy.

Aside from the money and ability to take a lavish surf vacation, some doctors can work 3 days a week if they have long overnight shifts. Now this will probably be down the line after you’ve spent your 20s and 30s as medical school slave labor but there are other options...

My cousin works as a travel nurse and this may just be one of the dopest potential surf jobs I’ve ever heard off. You sign 3 months contracts wherever they need nurses (pretty much everywhere). Then you decide if you’d like to stay longer, take a month(s) off, or move to another location.

The only thing you have to check on is having the right credentials to work in each location. But you're pretty set as far as job stability goes in any major city.


Other Notable Travel and Surf Jobs